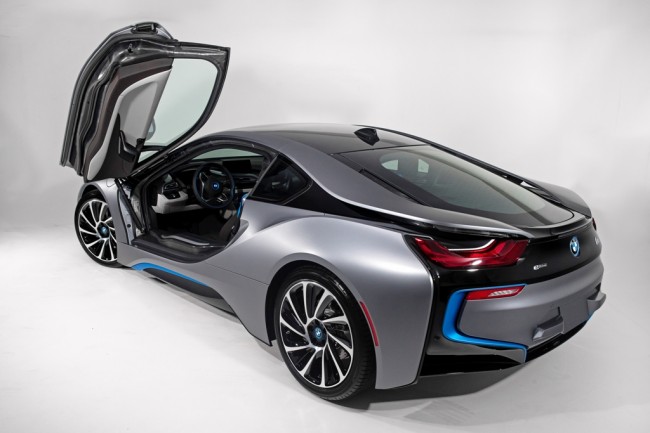 If the recently-unveiled BMW i8 wasn’t exceptional enough for you, take a look at the one-of-a-kind 2014 BMW i8 Concours d’Elegance Edition (French for “elegance contest”). Not only is the i8 revolutionary in its own right as a leap forward for electric sports cars, but this special edition created specifically for the Pebble Beach Auctions features stylish accents no other i8 will mimic.

Being that the i8 is BMW’s announcement to the world that  electric cars don’t have to compromise on power, the manufacturer didn’t hold back on mechanical muscle. A TwinPower Turbo 3-cylinder, 1.5 liter rear combustion engine (six-speed automatic) and a front-mounted electric motor (two-stage automatic) ensure that. And, one can’t forget the 362 horsepower, either. Additionally, the body features a double-wishbone-axle front suspension system coupled with five-link rear-axle suspension. This will also be the first series-produced car to include optional laser headlights.

However, the biggest selling feature is BMW’s patented LifeDrive architecture, which was specifically-designed for electric vehicles. The Life Module and Drive Module units of the vehicle, crafted with high-strength Carbon Fiber Reinforced Plastic (CFRP), revolutionize the customary structure and aesthetics of an electric car. Pair this with BMW’s EfficientDynamics technology, intended to make the BMW a leader in energy efficiency, and you have a product that’s both smart and powerful.

Unique Features of the 2014 BMW i8 Concours d’Elegance Edition

The Concours d’Elegance Edition of the 2014 i8 was designed specifically for the Pebble Beach Auctions, presented by Gooding & Company. The first aspect that stands out is the unique paint scheme, advertised as a “unique frozen grey metallic” exterior with a “pure impulse tera world” interior, which won’t be available on other models.

The second feature will be “Pebble Beach Concours d’Elegance Edition” laser inscribed into the door sills, accompanied by a plaque on the rear parcel shelf featuring signatures of BMW head designers and board members. Other interior features include Dalbergia Brown leather upholstery, and BMW iBlue accents.

Undeniably, the classiest aspect of the Concours d’Elegance Edition will be the Louis Vuitton luggage custom-tailored for the BMW i8. Yes, you can have your cake and carry with you, too.

The Future of Electric Sports Cars

BMW, and the automotive industry in general, has a lot riding on the success of the BMW i8. If environmental-friendly electric luxury and sports cars are ever going to be on assembly lines next to the compact cars of middle-class, eco-enthusiasts, the technology will need to be embraced by wealthy, extravagant  buyers (and their wallets).  Buyers must be convinced that electric cars don’t compromise on performance and style in favor of trivial aspects like fuel-efficiency and renewable energy. According to BMW, with the introduction of the i8, “[it] thus convincingly resolves the apparent contradiction between efficiency and dynamics.”

Thus, a stunt bringing attention to the new i8 model in the form of a highly-publicized, affluent auction makes sense. It advertises the eye-catching aesthetics and revolutionary fusion of electric and petrol engine for the i8 while drawing interested buyers out of the woodwork.

The auction will be streamed live on August 16 at 8:45pm PDT on Gooding & Company’s website, where you can also obtain more information on the Concours d’Elegance Edition or register to bid. Gooding estimates the cost to fall around $150,000 to $200,000, without reserve. Happy bidding (or, in our case, dreaming)! 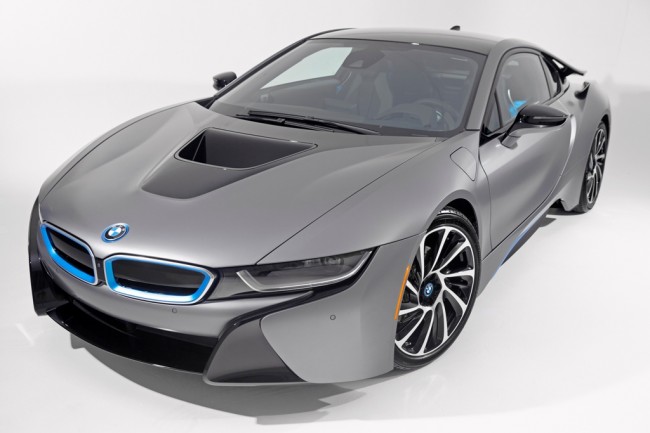