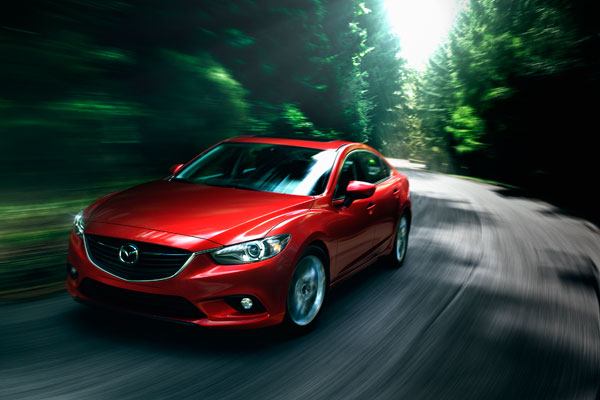 The MAZDA6 has been completely redesigned for the 2014 model year inside and out.

The all-new exterior styling of the 2014 MAZDA6 begins with the imposing new front grille, which sets the tone for the rest of the sedan. The bold lines draw to an end as they reach the aggressively-sculpted taillights that will be sure to grab the attention of those the MAZDA6 zips by. Standard 17-inch alloy wheels complete the 2014 MAZDA6’s athletic stance.

The 2014 Mazda MAZDA6 is powered by a 2.5-liter four-cylinder engine that generates 184 horsepower and 185 lb-ft of torque. The MAZDA6 is one of the quickest four-cylinders in its class, as the 2.5-liter engine propels the MAZDA6 from 0-60 mph in just 7.6 seconds.

Fuel economy is where the MAZDA6’s four-cylinder really sets itself apart. The surprisingly quick engine returns an impressive 26 mpg city and 38 mpg highway, but those numbers become even more remarkable with the addition of Mazda’s i-Eloop feature, which boost fuel economy to 28 mpg city and 40 mpg highway.

The redesign didn’t only occur outside the 2014 MAZDA6; inside, the focus was placed on form and function, and Mazda made sure all passengers would be comfortable with a roomy backseat and ample legroom. There is also a slew of standard technologies for drivers who opt for the base automatic transmission MAZDA6, including a 5.8-inch touchscreen, Bluetooth connectivity, a rearview camera, iPod/USB interface, and HD radio with Pandora.