The 2015 Mopar Dodge Charger R/T NHRA Funny Car is seemingly unstoppable. At the first two competitions of the 2015 NHRA Mello Yello Drag Racing Series, the first at Winternationals and the second at Wild Horse Pass, the reigning champ from last year, Matt Hagan, took first place. It wasn’t until the third competition, the Gatornationals, that teammate Ron Capps dethroned the reigning king and took first place. All three victories were achieved, of course, behind the wheel of the new Charger R/T Funny Car. 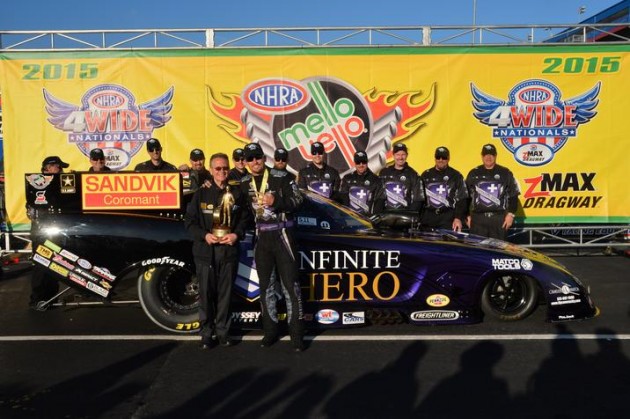 The fourth competition this season was the Four-Wide Nationals, held at zMAX Dragway, part of Charlotte Motor Speedway. While neither Hagan nor Capps took the title, yet another Don Shumacher Racing driver, Jack Beckman, climbed his way to the top, inside the trusty Dodge Charger R/T. Beckman is a veteran victor at Four-Wide Nationals, having taken home the title once before; this win also marks his 16th victory in his Funny Car career and ends his painful 54-race losing streak.

“If there was a track and a format where the new 2015 Mopar Dodge Charger was perfect for us this was it,” Beckman remarked. “This new cockpit configuration was perfect for the Four-Wide format where it is difficult to stage. I’m just so elated. Every nitro win I have ever had has been in a Dodge Charger and this is my first in the new Mopar and I don’t think it will be the last this year.”

Be on the lookout for Mopar’s next appearance in two weeks at the strip at Las Vegas Motor Speedway, April 10th – 12th.