95 MPH in a Runaway BMW: Florida Man’s Gas Pedal Gets Stuck on Interstate

A Florida driver survived a nightmare scenario Monday: barreling down the interstate at 95 mph with a jammed gas pedal.

Joseph Cooper was driving his 2003 BMW X5 north on I-95 near Vero Beach when his accelerator got stuck. He didn’t panic and was able to call 911.

The dispatcher talked Cooper through a variety of solutions—applying the emergency brake, setting cruise control, shifting into neutral gear, and more—but none of their efforts could slow down the runaway Beemer.

At one point, Cooper told the dispatcher that he nearly hit another driver. “Get out of the way!” he can be heard shouting on the 911 recording.

With Cooper unable to regain control of his SUV, Florida state troopers stepped in. They deployed spiked strips, which punctured two tires and slowed the vehicle down to around 60 mph.

Fellsmere Police deployed more spike strips, which blew out two more tires and slowed the SUV down to 40 mph. The vehicle rolled along on four rims and eventually came to a stop. 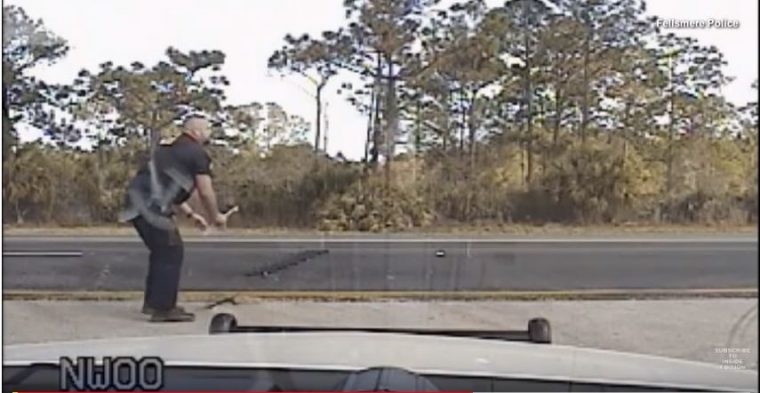 Florida police deployed spike strips to stop a runaway BMW on I-95 earlier this week
Photo: Inside Edition

Finally, 45 miles after Cooper’s nightmare began, it was over. Nobody was injured, although Cooper was taken to the hospital after reporting chest pains.

A BMW spokesperson told ABC News that the scenario was “implausible.” The company said its “fail-safe software” is designed to override the accelerator when a driver hits the brakes, and should cut the engine power if both pedals are depressed. BMW also said that design of its accelerator pedals prevents them from being jammed by any objects.

“BMW drivers have long been able to rely on integrated safety systems that help ensure safe operation of every BMW vehicle,” the company said.

BMW went on to suggest ways Cooper could have stopped the vehicle. “We would be happy to work with the Florida State Police to investigate the cause of this incident,” the automaker said.