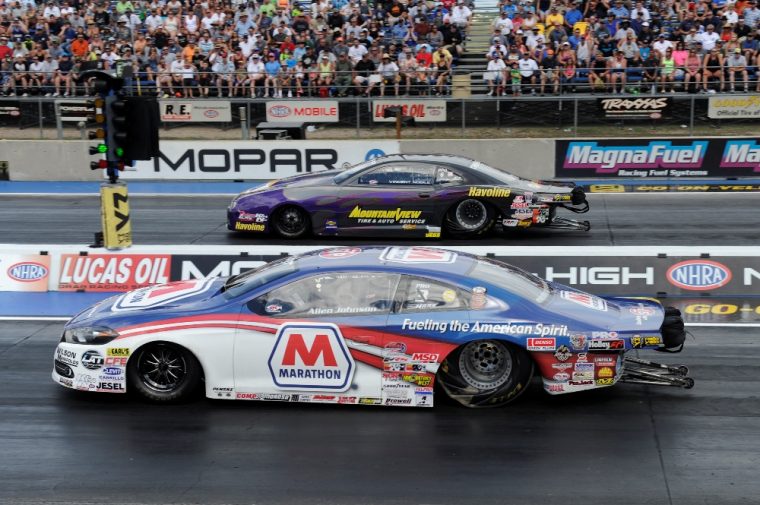 For the first time this year, a Pro Stock driver not named Jason Line or Greg Anderson was able to pick up a victory.

The man responsible for this accomplishment was Allen Johnson, who drives the J&J Racing Marathon Petroleum Dodge Dart. The win marked Johnson’s seventh career victory at Bandimere Speedway and it was the 27th Pro Stock Wally trophy that he’s earned in total.

Heading into the event, Johnson had qualified in the No. 10 position, but on his journey to victory lane, he was able to defeat Drew Skillman, Erica Enders, Greg Anderson, and Vincent Nobile.

“We are thrilled to have Allen Johnson take a Mopar Dodge Dart to the winner’s circle for a hard-fought first national title this season and to see him do this at the Mopar Mile-High Nationals for the seventh time,” said Pietro Gorlier, Head of Parts and Service (Mopar), FCA – Global. “The never-give-up attitude and hard work this team has put in to tune the HEMI and get the win truly represents what Mopar performance is all about.”

The was the first win for Johnson since the season finale in Pomona a year ago and he actually seemed surprised that he won.

“I wouldn’t have given ourselves a one-percent chance to win this thing today. You know what, this team dug down deep, and we got a little better every run,” said Johnson. “We just hung right in there, and maybe we had a break or two. The magic up here is just on our side for some reason.”

The win moved Johnson within 70 points of third place in this year’s Pro Stock points standings.