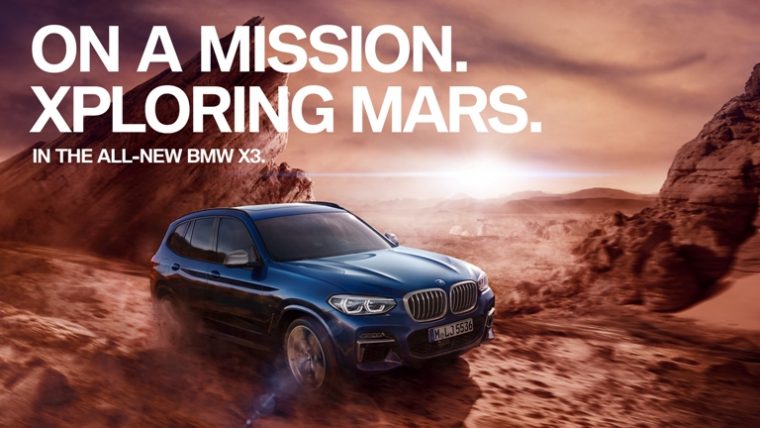 Automotive advertisements have taken audience members to a great number of locations across the globe. However, the newest campaign from BMW is taking those audience members out of this world, in a rather literal sense.

BMW’s “On a Mission” campaign recently took the BMW X3 to Mars.

To elaborate, BMW didn’t actually transport the X3 to another planet just for a car commercial, although that would be the most amazing (and undoubtedly most expensive) commercial of all time. Instead, the German automaker simply simulated what it thought driving on the surface of Mars would be like for the video.

The “Mission to Mars” video isn’t your traditional car commercial either. It allows for audiences to explore both the interior of the X3 and the planet’s surface utilizing a 360-degree view.

You can view the video for yourself below:

For the campaign’s other TV spots, BMW kept things more down-to-earth. And by “down-to-earth,” we mean following extreme athletes as they perform amazing stunts in the Arctic.

Such athletes include Freddie Meadows, who takes to the chilly waters for a round of surfing, and Martin Söderström, who bikes across rocky ridges in the area.

All of these advertisements have one thing in common: they show the incredible versatility of the new BMW X3. That was the exact goal that BMW had in mind when designing the campaign.

“‘On a Mission’ pays tribute to a life full of passion, inner drive and true dedication,” explains Hildegard Wortmann, Senior Vice President of the Brand BMW. “The BMW X3 brings this dynamic to the automotive world and guarantees a thrilling driving experience, no matter where your passion takes you.”

Plan a Trip of Your Own: How to stay entertained during road trips

The X3 was first showcased during the IAA International Motor Show in Frankfurt and will be available to the public starting in November. If you’re like Elon Musk and planning on a trip to Mars in the near future, now you have an SUV that can supposedly tackle the planet’s tough terrain, thus making an intergalactic drive seem rather suburban.