BMW has taken a very German approach to its appearance at the 2014 LA Auto Show: park your new cars in a line and let people see them. No flashy press stunts or waste-of-time advertising gimmicks here. “Here’s quality car, ja. German engineering.”

That’s actually quite refreshing, showing the confidence BMW has in its products rather than trying to use marketing ploys to attract undue attention. The vehicles should speak for themselves, after all.

New Models Showcased by BMW at the LA Auto Show

This year, as with most years for the brand, BMW was concerned with improved power output and engine performance, according to Carsten Pries, Head of Product Development for BMW M.

BMW X5 M: BMW’s first day at the LA Auto Show focused on this new sport activity vehicle, a boxy grey model that can hit o-60 mph in four seconds thanks to a supercharged V8. It might look smaller and less sporty than other BMW crossovers, but it’s one of the strongest.

BMW X6 M: Like the X5M, this sport activity vehicle was predominantly featured on the first day of the LA Auto Show. The aggressive, and quite unique, crossover shares many similarities with the X5 M under the hood. However, its sapphire paint job and sedan-like rear end make it an odd bird.

An X6 without M Performance variations was also on display.

BMW 2-Series Convertible: Making its United States debut, the silver 2-Series Convertible offers more space than its predecessor. With its infotainment features and adaptive suspension, it’s predicted to become a major-selling entry in the US market.

BMW M4: Two entries from the M4 family showed up for the party: a Sport Activity Coupe in signature Fire Orange and an M4 Convertible in Mineral Grey Metallic. Both share an S55 3.0 liter inline-six TwinPower engine–and both blow out 425 horsepower. The M Performance Parts like the carbon fiber inserts were an especially stylish touch. 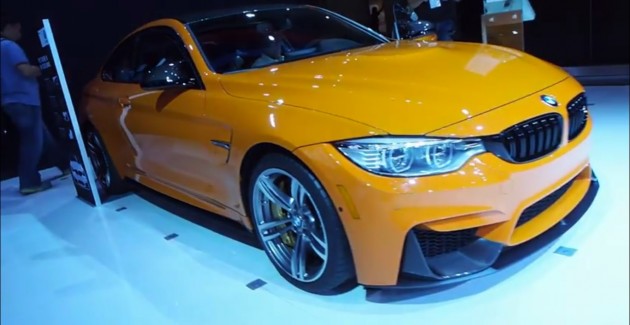 You can see a brief recap of the event thanks to a video below shared by BMW USA, including interviews with BMW executives (if you can hear over the overly loud music):