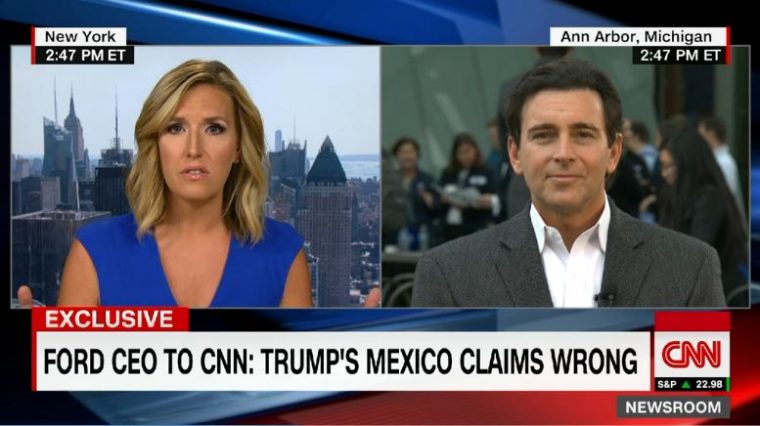 Ford CEO Mark Fields announced on Tuesday that the automaker will have moved all small-car manufacturing to Mexico within “the next two to three years,” which created enough of a stir in the atmosphere that it roused a hideous orange beast from its ancient slumber.

Republican presidential nominee and somewhat-flesh-colored garbage bag filled with fresh turds Donald Trump was on Fox & Friends on Thursday, where he interpreted Fields’ announcement as meaning that Ford would “fire all their employees in the United States.”

As if that wasn’t ridiculous enough, he also took credit for the timing of the announcement—one that was ostensibly already made clear in April—saying that Fields chose to make his comments when he did “because they think I’m going to win and I’m going to stop them.”

It was a successful media appearance for Trump, at least insofar that he managed not to say anything racist or demean any women. So, there’s that. Progress is real. 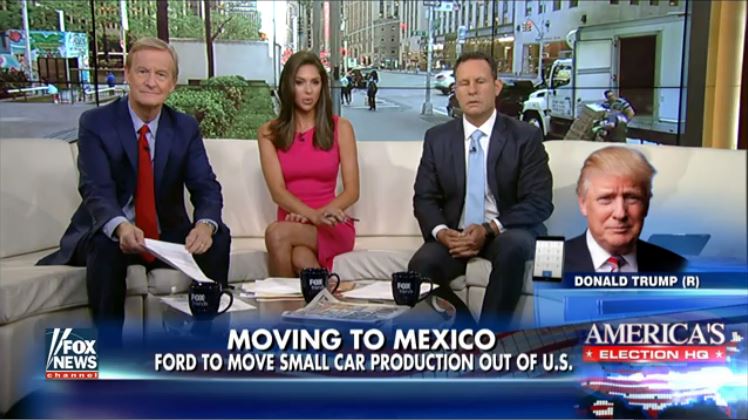 Fields was interviewed later on Thursday by CNN’s Poppy Harlow, where he responded to Trump with the same mixture of bemusement and frustration one might possess when addressing a child who has painted crude figures on a wall in his own excrement and, despite being caught brown-handed, continues to make up increasingly implausible stories about being framed by otherworldly doo-doo monsters.

Asked by Harlow whether Trump’s assertion that Ford would willingly destabilize its own business and the United States economy by firing nearly 100,000 people was true, Fields stated that “it’s really unfortunate when politics get in the way of the facts, and the facts are Ford’s investment in the US and commitment to American jobs has never been stronger.”

An inverse of Fields’ statement—“It’s really unfortunate when facts get in the way”—would actually hold up reasonably well as Trump’s newest campaign slogan.

Fields then cited some facts—basically the equivalent of holy water for Donald Trump—such as Ford’s creation of more than 28,000 American jobs in the past five years and a total investment of more than $12 billion toward manufacturing operations in the United States. 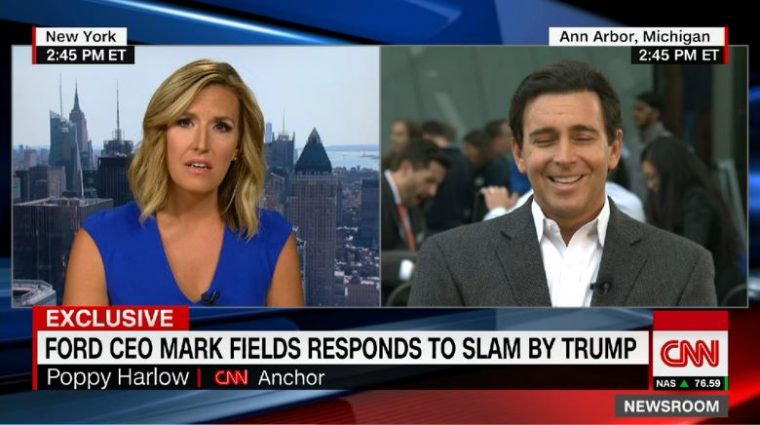 TFW someone tells you they are voting for Donald Trump
(Not pictured: internalized feelings of existential horror, fear for the future of mankind)
Photo: CNN

When asked by Harlow if the move of small-car production to Mexico would result in the loss of even one job in the United States, Fields could not help but laugh.

“Absolutely not. Zero. And what we announced is that we will be moving our Focus out of Michigan so that we can compete more financially in that particular segment. But at the same time—and that’s an agreement we have with the UAW—what we’ll be doing is we’ll be replacing those products [Focus and C-MAX] with two very exciting new products [likely the Ranger and Bronco], so not one job will be lost. Most of our investment is here in the US, and that’s the way it’s going to continue to be.”

As if compelled to dig the dagger in just a bit deeper, Harlow asked if “Mr. Trump is wrong.”

What Fields may have forgotten to add: “On every conceivable level.”

To see the rest of the interview, check out the video below: