Ferrari-Powered Toyota 86 Does Donuts Around Ferrari 458 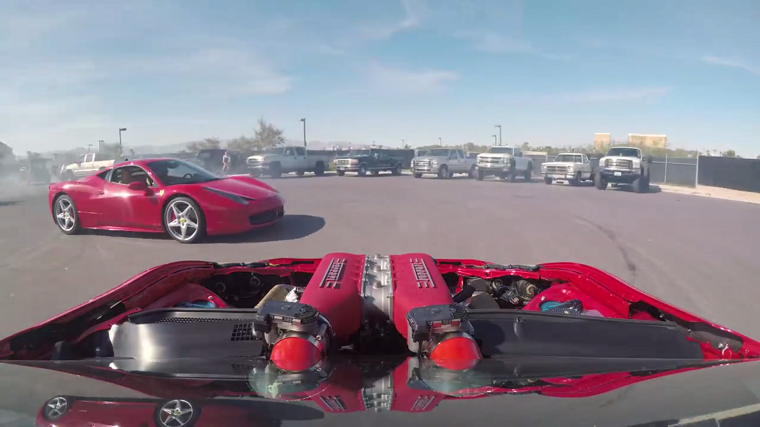 At the start of August, we looked at pro drifter Ryan Tuerck’s crazy project to install a Ferrari V8 engine inside a Toyota 86. Yes, that is as crazy as it sounds. At the time, the build was in its early stages and there was no telling when it would be ready to drive. We assumed it would be a few months, and we were right: it’s ready to go, right now.

Three days ago, Tuerck and his crew released a video in which he was seen revving the 86’s new engine, with flames spitting out of the exhausts that exited from either side of the front bumper (awesome design decision, by the way). Understandably, everyone wanted to see more—and they only had to wait an extra day.

Two days ago, another video was released, this time showing the rigged Toyota doing donuts around none other than a Ferrari 458, the same model from which the 86’s transplanted engine is originally taken from.

Thanks to its bespoke wheels, massive rear wing, and custom headers, the tuned Toyota 86 is barely recognizable—and without a hood to cover up the engine, it would be an understatement to say it looks absolutely insane.

Still, we want to see more. A 30-second clip just isn’t enough—we’re hoping Ryan Tuerck and his crew are hard at work on a Ken Block-style drifting video. Maybe then, and only then, will our hunger for more Ferrari-powered Toyota 86 action be sated… but probably not.