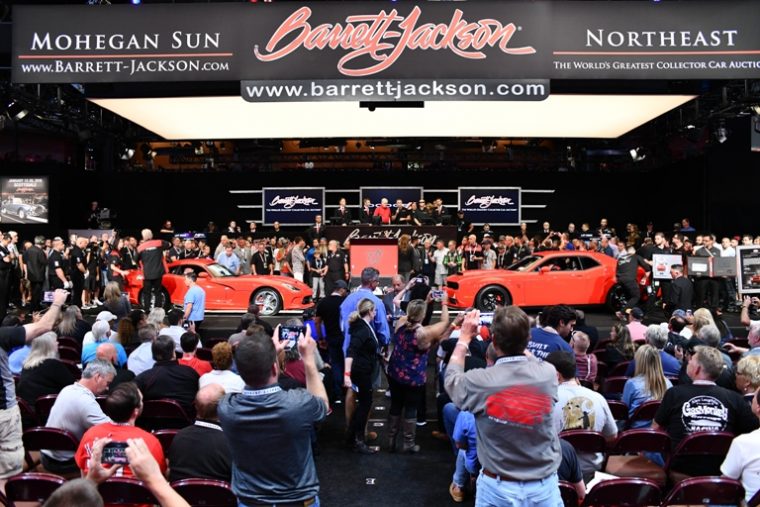 The Dodge Demon and Viper are now going, going, gone

Back in April, The News Wheel reported that Fiat Chrysler Automobiles was preparing to auction off the final Dodge Viper and Dodge Demon together during the Barrett-Jackson Northeast Auction in Uncasville, Connecticut. That auction-based Barrett-Jackson event recently wrapped up last week on June 23.

So how much did the “Ultimate Last Chance” duo of the Viper and Demon go for? The winning bid capped out at $1 million!

Dan Snyder, the CEO of media company inLighten and founder of Dan Snyder Motorsports, cast the winning bid as the auction came to an end. Snyder has a collection of more than 70 automobiles, including 30 Dodge Vipers.

“From the first time I saw the Viper concept over 25 years ago, I knew I had to own one,” Snyder explained. “After my first drive, I was addicted. When the Demon came to life, it was a natural extension of this passion, with the two delivering the best on track and strip – a perfect pair.”

That winning bid, the highest set during the entire four-day Barrett-Jackson event, will be used to help a good cause. FCA chose to once again sponsor the United Way during the event, with 100 percent of proceeds donated directly to the organization.

“We know the power of the Dodge Viper and Dodge Challenger SRT Demon to put a smile on people’s faces; we’re smiling today because we know the power of this donation to the United Way,” said Steve Beahm, Head of Passenger Car Brands, Dodge//SRT, Chrysler and FIAT for FCA North America.

Both the last Viper and the last Demon wear an exterior coat of the custom Viper Red color. The pair also came included with several pieces of automotive memorabilia, such as certification cars, authentication kits, and even a set of iPads.

Though it’s sad to see both the Viper and Demon leave the Dodge lineup of vehicles, this is one impressive send-off for both models.