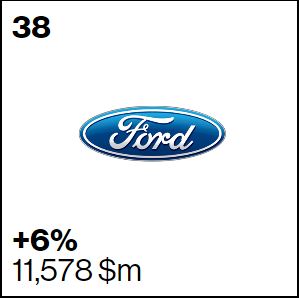 Ford was named 38 on Interbrand’s annual 100 Best Global Brands study, climbing one spot from its position in 2014.

Stuck Without the Right Amount of Juice? How to jump-start your car

While Ford has made continuous improvement over the past six years, it’s still a long way away from achieving its highest ranking and total brand value. In the inaugural year of the Interbrand study, Ford ranked seventh and was the top automotive brand in the world with an estimated value of $36.368 billion, outranking Disney, McDonald’s, and Cisco.