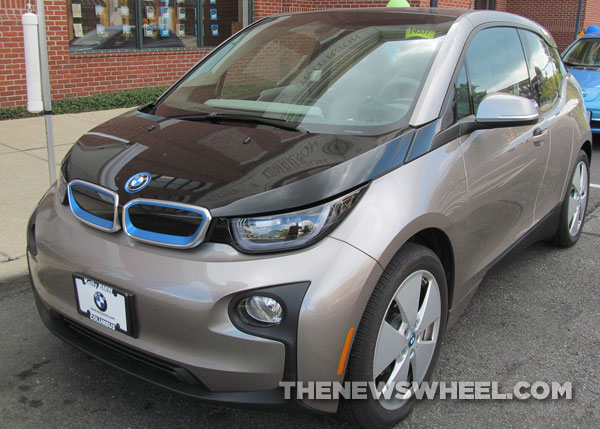 Recently, one of The News Wheel‘s editors was able to take a test drive in the all-electric 2015 BMW i3 at the Drive Electric Ohio event in Columbus–and he couldn’t wait to share his experience!

We’ll hand the mic over to Aaron as he tells us about his BMW i3 test drive.

Dig Deeper: Read more about the BMW i3 specs

Hop Aboard for a BMW i3 Test Drive

Before I got to the actual BMW i3 test drive, I was the polite recipient of the sales pitch explaining the highlights of the 2014 World Green Car of the Year.

Constructed of materials including carbon reinforced plastic, hemp, grass, and cloth, the BMW i3 is proudly 90% recyclable. At 2900 lbs, it weighs 1/3 less than other cars. Because it possesses a smaller-capacity battery, the vehicle’s range isn’t as impressive.

The paint scheme of the model I test drove was ionic silver metallic, and with those striking iFrozen blue accents, which is understandably the most popular i3 look. At least it wasn’t that ugly solar orange! And, I was obviously a fan of the mega carum spice grey sensatec interior (just don’t expect me to say that out loud). The vehicle fit four of us comfortably.

Finally, it was time to rev it up and take the BMW i3 test drive on the road. 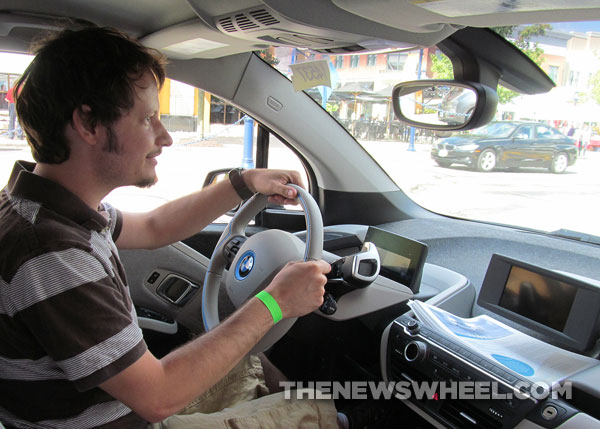 As is becoming common with more and more vehicles, the BMW i3 has a simple push start button that’s situated in the steering wheel console.

The first thing I noticed, as anyone would, is how eerily quiet the vehicle is, whether it’s moving or idling. The barely-audible electric motor made me forget the i3 was actually running a couple times. That will take some getting used to for many drivers; the purr of a combustion engine is almost comforting in the way it announces its life and presence.

The 70- to 100-mile range on the i3 is probably its biggest limitation. With a couple other test drives taken place on the same car that morning, the range was down to 38 miles– generally the time I’d be filling up my Saturn’s gas tank.

Visibility isn’t a problem, even for being a small car. The drive elements are below cabin and within the dashboard/trunk, allowing passengers to sit up higher.

Driving the BMW i3 through nearby suburban streets was admittedly fun; it’s smooth, precise, and easy to steer. After driving a couple donuts in a nearby parking lot, I felt comfortable controlling the i3 and its tight turning radius. That responsiveness also extends to the instant torque. The car accelerates almost immediately, and it doesn’t feel sluggish or wimpy like other EVs do (sorry, Nissan LEAF).

What impressed me most on the BMW i3 test drive was its brake regeneration. As soon as you let off the accelerator, the i3 slows itself down to an eventual halt, to the point that you’ll rarely wear out your brake pads. If you do use your brakes, the car converts that friction into juice that’s injected back into the battery. Just don’t expect to be coasting too much– the i3 slows down a bit too quickly for my taste. Still, the one pedal driving is a gem. 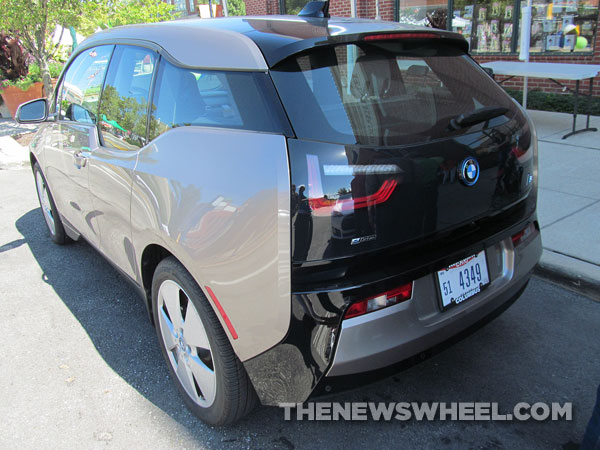 Overall, the BMW i3 is a solid in-city ride if you’re looking for an electric car that stands apart from underwhelming EVs from other mainstream brands. It might not be making the cross-country trips that the Tesla Model S is, but it’s a fashionable choice for those who can afford it. And, for around $41,350, with tax credits available, it’s not bad for a BMW.

Other Options: If electric cars aren’t for you, check out BMW’s Diesels