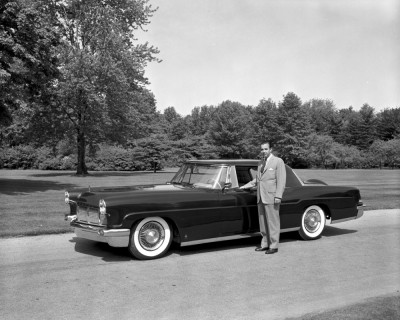 The automotive world is still reeling from the loss of William Clay Ford, who passed away March 9 from pneumonia. Ford was the last living grandchild of Ford’s founding father, Henry, and himself had a considerable impact on the industry. Of particular note is his contribution as one of the founders of the Continental Mark II.

When the Mark II debuted in 1955, it was the most expensive car in America at the hefty sum of about $10,000. According to Automotive News, that’s about $87,000 USD in 2014. It boasted an irresistible long hood/short deck profile, a 368 cubic-inch V8 that made a 120 mph top speed possible, and a number of extremely luxurious accoutrements.

Many considered it an instant classic, but Ford lost money on every single one of the 2,556 units sold in 1956 and 444 sold in 1957. The Continental Division folded after a little more than a year and was absorbed into Lincoln, who went onto create the Continental Mark III, which over the decades has evolved to  become the modern-day MKZ.

William Clay Ford’s drive and ambition gave us what has ultimately become one of the enduring vehicles of the World War II era in the Continental Mark II. And so long as they stand as an indelible part of American culture, so too shall stand the legacy of one William Clay Ford.