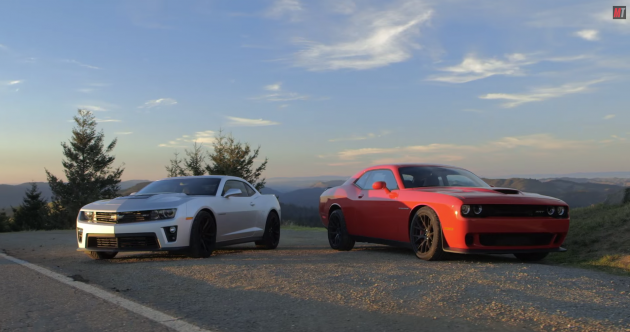 It’s Chevy Camaro ZL1 vs Dodge Challenger Hellcat in the latest installment of Motor Trend’s “Head 2 Head” video series. In the video, MT editor Johnny Lieberman compares “two of the most powerful American cars of all time,” by taking both of them for a spin on a closed-off portion of road on Mount Tamalpais in California.

Lieberman also pits the classic muscle cars against each other for a little road race (skip ahead to the 11-minute mark for that), followed by a burn-out contest that’s even more fun. 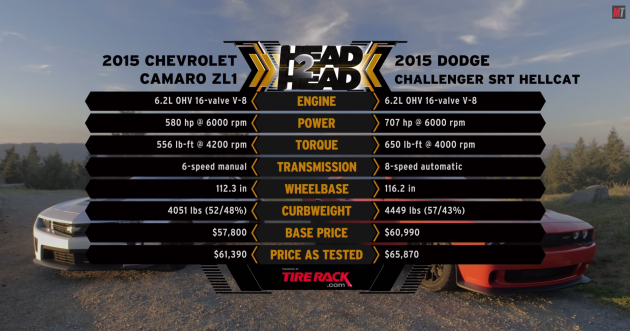 A rundown of the specs for each vehicle

To see which car comes out on top, check out the whole thing for yourself:

While Lieberman does call the Camaro a “badass car,” he also feels that it’s ultimately overshadowed by the Hellcat, and the numbers seem to back that up: While the ZL1 hit 60 mph in 3.9 seconds, the Hellcat did it in 3.7. And while the Camaro completed the quarter-mile in 12.2 seconds at 116.6 mph, the Challenger bested it again with an 11.7 second time and speed of 125.4 mph.

Still, in the “Head 2 Head” race, both cars finished with near-identical lap times of 38 seconds each, which can be attributed to the Hellcat’s power advantage being cancelled out by its 400 pounds of extra weight.

According to Lieberman, the Camaro is a “great car,” but the Hellcat “makes it feel slow.”