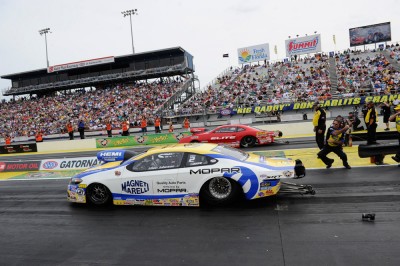 Just a three weeks ago, the Dodge Avenger bid the NHRA a fitting farewell by taking victory in an all-Mopar final at Wild Horse Pass Motorsports Park. This past weekend, the Mopar Pro Stock Dodge Dart and driver Allen Johnson picked right up where the Avenger left off by reigning victorious at the 2014 NHRA Gatornationals. 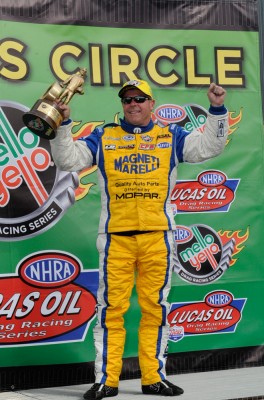 Johnson, who also piloted the Dodge Avenger to its final victory on February 23, brought the Mopar Pro Stock Dodge Dart across the finish line for its first victory in NHRA competition. The win also marks Johnson’s second-straight Gatornationals victory.

“Congratulations to Allen Johnson for taking the new Magneti Marelli Offered by Mopar Dodge Dart straight to the winner’s circle in its debut to earn the prestigious Gatornationals title,” said Pietro Gorlier, President and CEO of Mopar, in a press release. “What a fantastic way to demonstrate the quality of Mopar products and team work. To defend his title, earn consecutive wins, and take the early lead in the championship points makes us very excited about the future of the Dodge Dart and Allen’s bid for another NHRA Championship amid some strong competition.” 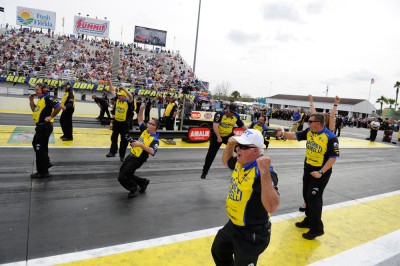 The 2014 NHRA Gatornationals served as not only the first foray into the Mello Yello Drag Racing Series for the Mopar Pro Stock Dodge Dart, but it was Johnson’s first race with “Magneti Marelli Quality Auto Parts Offered by Mopar” as his primary sponsor. Together, Johnson and the Dart looked like a formidable tandem for drivers and teams to contend with for the foreseeable future.

“Everything to do with the design of the Dart, the engineers took our input and really came up with a great car,” Johnson said. “To be able to do that (win in its first race) is a huge accomplishment.”

The next NHRA Pro Stock event occurs March 28-30 at The Strip at Las Vegas Motor Speedway. 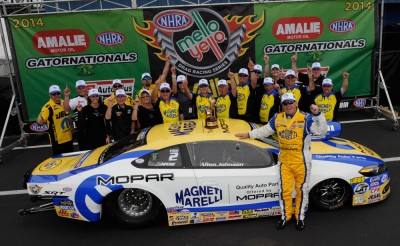