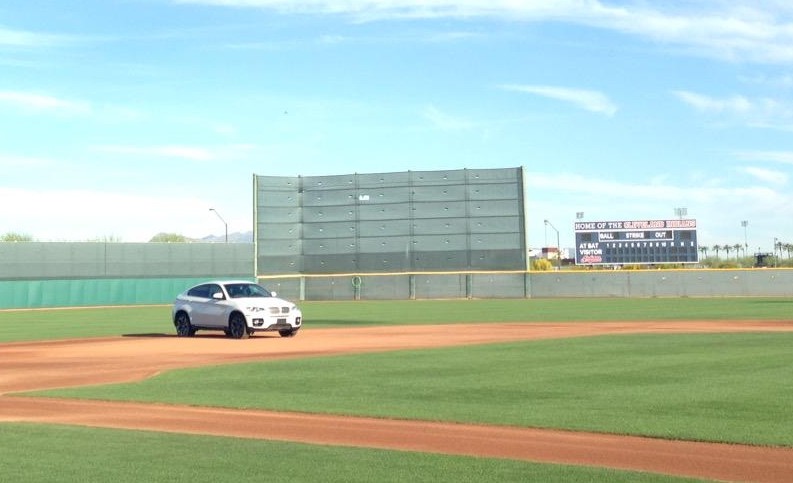 Major League Baseball’s spring training is a time when rookies and minor leaguers get a chance to prove themselves, and Jose Ramirez’s BMW seems to be taking full advantage of that opportunity. The Cleveland shortstop’s Bimmer was up bright and early this morning, taking his owner’s position on the field at the Indians’ spring training stadium in Goodyear, Arizona.

It’s a beautiful morning in Goodyear. The sun is out, birds are chirping… and Jose Ramirez’s car is at shortstop. pic.twitter.com/hRLpI39t2i

Sure, he’s not the most conventional shortstop (and with his speed, he should really be playing the outfield), and he’s not as “flashy” as stars like Alfredo Simon’s chrome Mercedes and Alcides Escobar’s gold Range Rover, but Jose Ramirez’s car has the heart, hustle, and determination that this Indians team needs right now. Call us sentimental, but we want to see that gritty SUV in Cleveland’s opening day lineup. Unfortunately, that probably won’t happen, because the whole thing was just a prank that Ramirez’s teammates played on him for a little revenge:

Francona said Ramirez has reputation for parking wherever he wants in lot. Teammates got him back w/ today’s car-parked-at-shortstop prank. — Jordan Bastian (@MLBastian) March 26, 2015

Yes, it was all just a joke—to everyone except Jose Ramirez’s car. That car has spent its whole life dreaming about playing in the big leagues, and has been working its rear bumper off to get there.

And look how much progress the car’s made—even manager Terry Francona has seen how far its come:

Francona on Ramirez’s car: “He drives a BMW? Times have changed.” Tito said he drove 71 VW bug w/ heat that never shut off… in 8th season.

That’s right: thanks to a hell of a lot of practice and hard work, Jose Ramirez’s car improved from a 1970’s VW bug to a new BMW X-series. That’s the kind of work ethic that wins championships, boys.