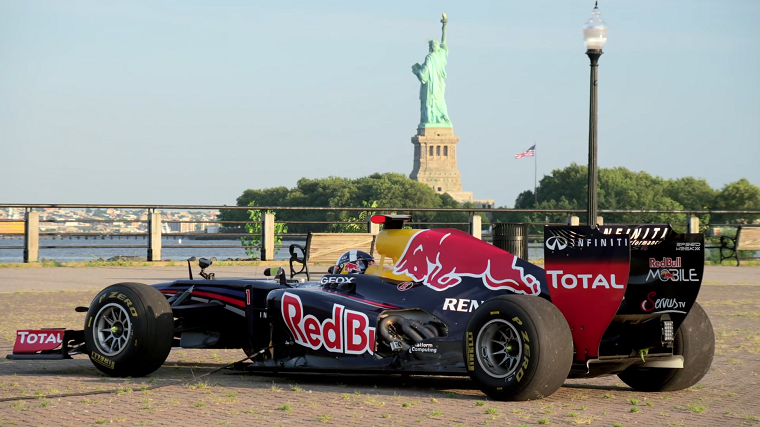 Rumors of a Formula 1 race with a view of the Manhattan skyline have been circulating since 2011, when a street circuit race had been planned outside New York City for the 2013 season. Though the organizers were far along in making the project a reality, it ultimately fell through for a number of reasons—but new F1 owner Liberty Media is keen on reviving the idea.

A lot of the groundwork has already been laid. In 2012, circuit designer Hermann Tilke had created the layout for a circuit in Weehawken, New Jersey, just across the Hudson River from Manhattan. The project had seemed like such a sure thing that the Red Bull Racing team had brought drivers Sebastian Vettel and David Coulthard to drive one of its championship-winning there and promote the event.

But if it had seemed so certain at the time, what’s different about the most recent rumors of a New York Grand Prix? For starters, the people handling the negotiations are new. Where Bernie Ecclestone once stood alone, famed for his greedy—let’s call it cutthroat—negotiation tactics, now stand three people all more invested in improving the future of the sport. Of key importance is that the American company Liberty Media is intent on expanding Formula 1’s currently low-key presence in the United States.

Supposedly, a New York Grand Prix could be featured as early as in 2018, but because the calendar for that year is already booked it wouldn’t appear before 2019 at the earliest. In fact, this could be where the real issues arise: if Liberty Media get its NYC Grand Prix, and also gets its rumored Las Vegas race, will that mean the disappearance of other, more iconic races on the calendar?

Perhaps the races can simply be added to the calendar rather than replace existing ones, but with 20 races and pressure to avoid having an event on the same weekend as the 24 Hours of Le Mans, the calendar is already quite full. Then again, I wouldn’t mind getting rid of the Azerbaijan Grand Prix and other races in countries with condemnable human rights records…

Car History: Learn all about the history of Mazda