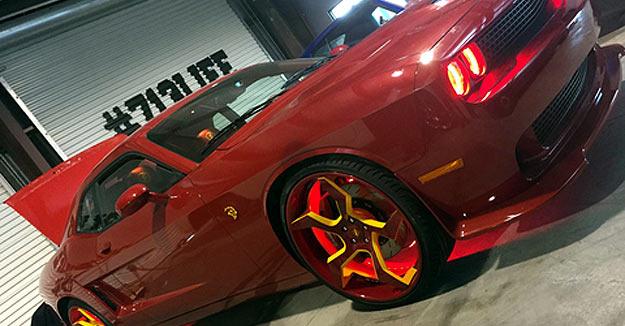 Dwight Howard is a great basketball player and has won the NBA Defensive Player of the Year award three times, but he isn’t very original when it comes to picking nicknames that he uses to style his cars.

When he played in Orlando, he stole Shaq’s “Superman” nickname and used it as the theme for his 2008 NBA Slam Dunk Contest performance. It would seem that he doesn’t know about “Swiper, no Swiping!”

Now, Howard is taking Dywane Wade’s old nickname of “Flash,” which was coincidentally given to Wade by Shaq. Howard is going all out in his attempt to cement his position as the new “Flash” by giving his 2015 Dodge SRT Hellcat a total “Flash” makeover complete with a custom paint job, a new superhero themed steering wheel, and “Flash” logos all over the vehicle.

The coolest modification to the Hellcat is the lighting system designed by 713 Motoring, which shines a “Flash” logo on the ground whenever Howard opens the door. Under the hood of the 2015 Challenger SRT Hellcat is the powerful 6.2-liter Supercharged HEMI V8 SRT Hellcat engine. This engine is good for 707 horsepower and 650 lb-ft of torque, and can produce a top speed of more than 200 mph.

The custom work is estimated to have cost Howard $65,000, but that’s nothing to a man that just earned more than $20 million playing in the NBA last season. Besides, he needed something to fill his time and take his focus away from Houston’s playoff elimination at the hands of Golden State and Steph Curry.