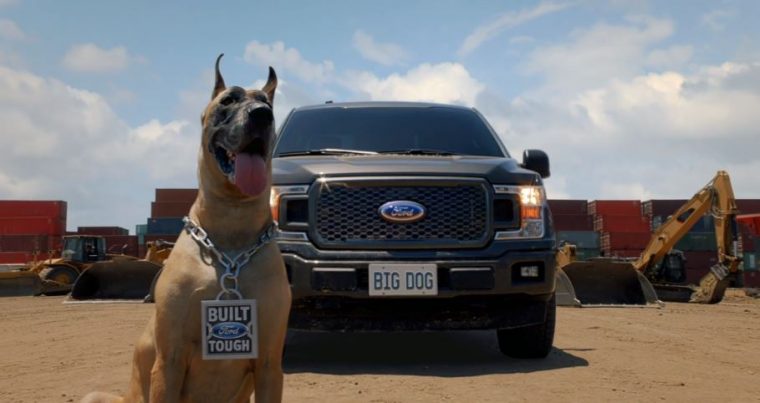 What do the Ford F-150 and WWE Universal Champion Roman Reigns have in common? No, it doesn’t have anything to do with being booed. It does have everything to do, however, with being hailed as the “Big Dog” in their respective fields.

A new 30-second ad for the Ford F-150, aptly titled “Big Dog,” demonstrates the various advantages that the full-size pickup has over the Chevrolet Silverado and Ram 1500. Namely, its best-in-class towing, payload capacity, and torque. And how do we find out about all of those upsides? Why, only through the soothing, pleasing voice of Bill Hicks impersonator Denis Leary! While Leary’s voice is — well, absolutely irritating — it’s at least a hair better than Michael Cole shouting about how the Ford F-150 is THE BIG DOG.

Leary, who still insists that he is your pal, explains that the view never changes for the F-150 since it is also the “Lead Dog” — which, presumably, is a title it holds concurrently with that of “Big Dog.” And while it never explicitly mentions the competition by name, the commercial makes it a point to note that the Silverado, Ram 1500, and other full-size pickups are left thoroughly in the dust.

The lack of direct comparison, according to director Paul Trillo, is quite intentional.

“When you’re the No. 1, best-selling truck in America, there’s no need to directly call out the competition by name,” Trillo told Automotive News. “Instead, it was about visualizing the F-150’s prowess in a way that no other truck commercial would do. There’s a cheekiness to the visuals, from the dog bobblehead to the exploding truck sand sculpture, that reminds us F-150 remains in the lead and it’s not afraid of having a little fun while it’s ahead.”

Woof. Buuuuurn. When you think about it, it makes sense: Why would Roman Reigns call out Curt Hawkins if it’s just understood that you exist on a different level? He wouldn’t. Because he’s not a bad guy, nor is he a good guy. He’s just the guy. So, by that metric, the new Ford F-150 is not a good truck or a bad truck. It’s THE truck.

Traveling with a Big Dog (or a Little One)? Three tips for safe trips with your pet