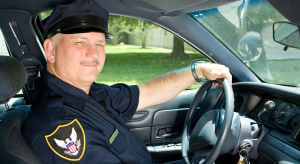 Most of the police cars you see today are special models, with improved brakes and turbocharged engines that make it difficult—if not impossible—for anyone to slip away.

But speed is not all that police officers need, which is why Ford has come up with a completely new technology designed to help protect officers instead of just letting them drive around more quickly. The system is called “Surveillance Mode,” which automatically sounds a chime, locks the doors, and rolls up the windows if it detects someone approaching the car from behind.

Some cars already have backup cameras and sensors but that kick in only when the car is in reverse. Ford allows officers to activate the new system while the car is parked, which will bring up an image of the backup camera onto the rearview mirror so that officers can’t keep an eye on what’s behind them. It also works at night and can be disabled if in areas of high population density.

Marc Ellison, vice president of operations at InterMotive Inc., which helped Ford develop the system, commented, “It’s like insurance. You hope you never need it. But if you do, it gives the officer a few extra seconds of warning.”

We feel a lot safer knowing that our police force is secure. What do you think about Ford’s new security system?

Brought to you by Town & Country Ford in Nashville, TN.