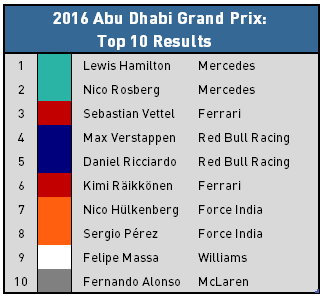 The last race of the 2016 Formula 1 World Championship at the Yas Marina circuit in Abu Dhabi was a nail biter.

It had seemed like it would be a relatively easy job for Mercedes’ Nico Rosberg. He headed into the race with a 12 point lead over teammate Lewis Hamilton, which meant that any podium finish would guarantee him his first World Championship title.

Hamilton had other plans in mind, however; he already has three titles under his belt and was keen to get a fourth—they don’t really share, those championship-winning types.

Unfortunately for him, just winning the Grand Prix wouldn’t be enough, nor would his attempted psychological mind games before the race. It must be said that Rosberg’s levelheadedness under the mounting pressure throughout the year has been impressive.

The only thing Hamilton could do to try to win the championship was to stay in the lead while being as slow as possible to back up his teammate into the opposition, and that’s exactly what he did. He kept at it even after team orders from high up in the chain of command told him to speed up, lest he give Ferrari a chance to win the race, but I can’t blame him—it’s that competitive spirit that wins you championships, and it made for a hell of an end to the race.

Think You Need New Brakes? Here’s how you can tell 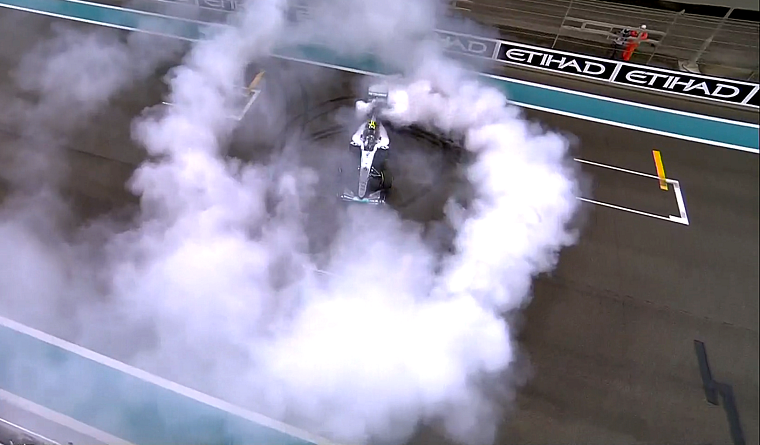 Hamilton was putting his foot down on the throttle just enough in the quick first sector where DRS makes the difference to prevent Rosberg from overtaking him, then slowed to what seemed a crawl in the third sector, where it is just about impossible to pass—allowing Sebastian Vettel’s charging Ferrari and Red Bull’s “Crazy Max,” as Rosberg called the young Verstappen—to get into play. If both passed the German, Hamilton would finally speed ahead and nab the championship.

Ultimately, the ploy failed. Rosberg defended valiantly and showed no signs of cracking under pressure despite some very close wheel-to-wheel action, and you could almost see the relief physically rolling off of him after the race ended. Finally, he could smile. Finally he could be himself and enjoy the championship he had been working toward ever since his childhood, emulating his father Keke Rosberg in the process. Finally he had beaten Hamilton, his former friend who had always seemed a step ahead of him ever since their karting days.

It was a great season with an emotional ending, not just because of Rosberg’s victory but also because it marked the retirement of two long-time and beloved drivers in Felipe Massa and Jenson Button. Still, the excitement of that last race has me impatient for the next season. When F1 returns next year in March, it will be with wider cars, bigger wings, massive new Pirelli tires, and it’s quite possible Mercedes won’t be the dominant force it has been for the last three years. Make sure to stay tuned for off-season developments!

Buying Used Cars: Why you may want to consider buying Certified Pre-Owned 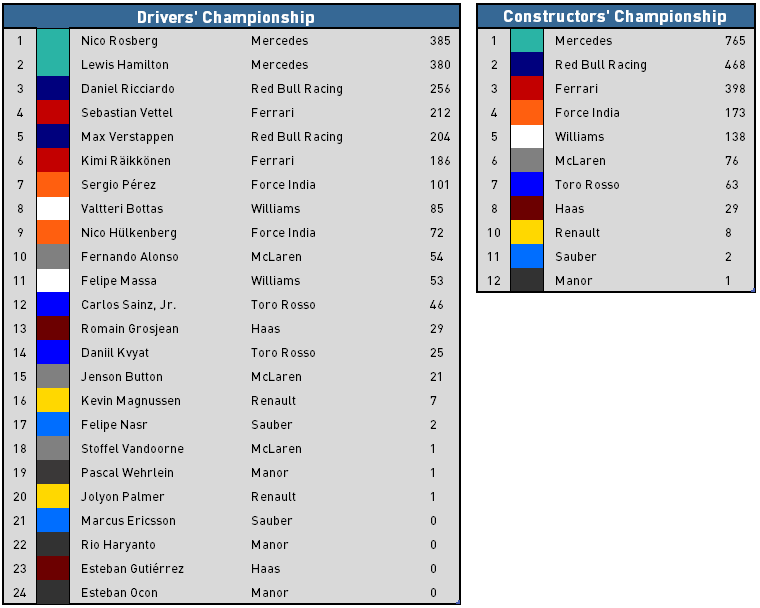