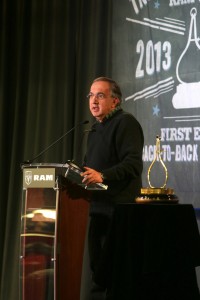 For its annual end-of-the-year list, Motor Trend announced last week that the Ram 1500 was its choice for 2014 Truck of the Year®. The announcement proper was made at the birthplace of Ram Trucks, the Warren Truck Assembly Plant in Michigan; Motor Trend’s report on what made the Ram 1500 its 2014 Truck of the Year® choice will feature in the February issue of their magazine and on MotorTrend.com

The 2014 Ram 1500 was tops among a field of nine trucks and vans that Motor Trend’s judges tested, including the Chevy Silverado, GMC Sierra, Ram Heavy Duty, and Toyota Tundra pickups; and the Ford Transit Connect, Mercedes-Benz Sprinter, Nissan NV200, and Ram ProMaster vans.

Each contender was tested at the Continental Tire Automotive Proving Grounds in Uvalde, Texas, to determine where each ranked in terms of

“For 2014 we had a large and highly competitive field of contenders for Motor Trend’s Truck of the Year,” said Edward Loh, Editor-in-Chief of Motor Trend, in Chrysler Group LLC’s press release. “At the end of the day, though, the Ram 1500 quickly rose to the top. Not only did it withstand our rigorous testing, it thoroughly impressed our judges with its vast array of standard and optional equipment, and, most notable, its fuel-efficient, segment-exclusive EcoDiesel V-6.

“With 420 lb-ft of torque and up to 28 ‘Real MPG’ highway, the EcoDiesel is a true game-changer,” Loh added. “In fact it helped make Ram 1500 the Motor Trend 2014 Truck of the Year – and the only consecutive winner in the history of the award.”

Not only was the previous iteration of the Ram 1500 named 2013 Truck of the Year® by Motor Trend, but it also won top truck honors at the 2013 North American International Auto Show and from the Texas Auto Writers Association and Rocky Mountain Automotive Press.

“Half-ton truck customers have been asking for a diesel engine and Ram is the only truck manufacturer to answer the bell and deliver not only best-in-class fuel economy but also 9,200 pounds of towing capability,” said Reid Bigland, President and CEO Ram Truck Brand, Chrysler Group LLC. “In a brutally competitive truck industry, the Ram 1500 is the only vehicle to ever win the Motor Trend Truck of the Year award two years in a row, reaffirming the fact that we have the best truck on the road.”