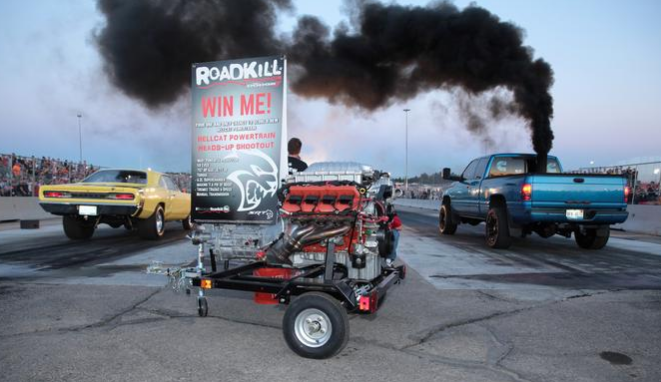 Drag racing is typically frowned upon throughout the United States because of its illegal status—that is, unless it happens to be at the Roadkill Nights Powered by Dodge event. Dodge is holding its annual Roadkill Nights on August 19th, and it will take place on Woodward Avenue, one of the most legendary roads in the world. The biggest newsworthy bit of this event, though, is that “flashlight” drag racing is going to be legal during it.

“Woodward is one of (if not the) most famous ‘Muscle Car corridors’ in the country and, as far as we know, this is the first time ever that street racing on it will be legal,” said Tim Kuniskis, Head of Passenger Cars for Dodge, SRT, Chrysler, and Fiat. “Drag racers will be able to show their muscle when Woodward is closed from South Boulevard to Rapid Street in Pontiac to create what is sure to be an epic kick off to the weekend’s cruise events.”

This year’s event includes a new, larger location at the M1 Concourse in Pontiac, Michigan. It will also have a cash purse totaling $19,000 and legal street drag racing on Woodward Avenue. David Freiburger and Mike Finnegan, the co-hosts of ROADKILL, which is the most-viewed YouTube automotive series in the world, will be leading the events.

Fall in Love: See how Dodge can make you fall in love

With more than 10,000 performance car lovers going to the inaugural event last year, there’s no doubt that this year’s event will be a huge success. The event will run from noon to 10 PM on August 19th with thrill rides in a Dodge Viper, Dodge Challenger SRT Hellcat, and Charger SRT Hellcat available. There will also be live music, food trucks, and more.