At this point, Dodge might as well reveal the Dodge Demon a month early

In the weeks leading up to its official reveal, the Dodge Demon is quickly becoming something of  a walking paradox, or rather, a driving paradox. Dodge’s extensive “If You Know, You Know” campaign has hidden the Dodge Demon is the shadows, only offering the most obscure looks at the upcoming muscle car.

However, the Fast & Furious franchise then enters the scene like Vin Diesel driving through a wall. Only in this case, he’s driving a Dodge Demon.

Trailers and television spots for the upcoming The Fate of the Furious movie aren’t even the guiltiest culprits when it comes to leaking the Demon. Music videos for songs featured in the eighth Fast & Furious film appear to be claiming that honor.

“Go Off” is a collaboration between artists Lil Uzi Vert, Quavo, and Travis Scott. The song seems to be quite the match for the outlandish, but entertaining movie franchise, with lyrics like “Why you pay so much for your Nissan? Because it’s GTR!”

However, the biggest shout out is not for Nissan fans, but for Dodge fans instead. That is because this music video probably provides them with the clearest look yet for the 2018 Dodge Challenger SRT Demon.

Now this is how you start a music video!

To start with, the very first shot of the music video features artist Quavo standing right in front of the Demon. And it is clear as day! From there, the music video only offers more looks at the Dodge Demon, including its tires producing smoke behind it.

The Demon closeups are mostly relegated to Quavo’s portion of the music video. Travis Scott, meanwhile, raps while dragging Dom’s famous Dodge Charger behind him.

Taking the Charger out for a walk

For Lil Uzi Vert’s portion of performance, the location is swapped out for the wrecking ball scene featured prominently in the trailers for the movie. The rapper even performs while riding a wrecking ball.

The end of the music video offers up one last look at the Dodge Demon. It turns out to be the car Dom uses to ram into a truck driven by Luke Hobbs, played by Dwayne “The Rock” Johnson.

The only car powerful enough to take down Dwayne Johnson

For all of these glimpses of the Dodge Demon, or if you just want to listen to the song, you can watch the music video for “Go Off” below:

“Go Off” is just one of the many songs featured on The Fate of the Furious: The Album. So we could potentially have a whole collection of Dodge Demon-leaking music videos on our hands.

Included in the album are the following tracks:

The Demon Leaks Keep Coming: Did Vin Diesel’s ‘The Fate of the Furious’ Speech Video Just Leak the Dodge Demon?

As stated earlier, the music video for the Spanish version of “Hey Ma” has already been released. Until the release of the “Go Off” video, it provided Dodge enthusiasts with the clearest look at the Demon. 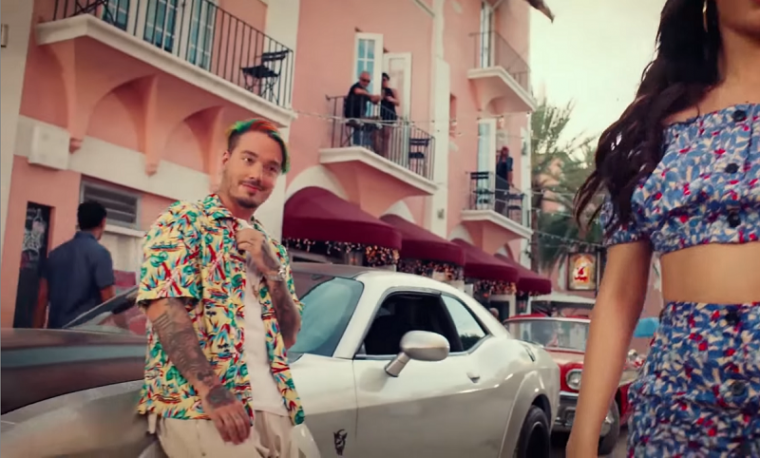 It also provided viewers with a clear look at J Balvin, a man whose hairdo is inspired by Rainbow Dash from My Little Pony

You can watch the music video for “Hey Ma” below:

I suppose if you want a clear look at the 2018 Dodge Challenger SRT Demon, you don’t have to wait for the New York International Auto Show. All you really need to do is wait for the next music video from The Fate of the Furious: The Album to make its debut.

Every music video gets a Dodge!