It’s a great time to be a Formula 1 fan. The 2014 regulations changed up a little of everything: they ended Red Bull’s win streak, they made the engine more important than aerodynamic trickery, and they caused drivers to make career choices we never thought would happen.

If you spent some time away from the sport–and who could blame you, after the snoozefest that was 2013–you might want to come back for the 2015 Formula 1 season. And here’s why.

The dream-team combination of the late 1980s returns. Honda, which powered McLaren to the most dominant constructors performance in the history of F1, is back for more. It won’t be Senna and Prost at the wheel and the car probably won’t bear that classic white-and-red paint scheme, but the expectations are high and McLaren-Honda is rising to meet the hype.

Related: Learn more about the McLaren-Honda partnership in this video

2 – The teams are more competitive than ever

Mercedes rocked the 2014 season without a doubt. But as to who was the best of the rest, that’s a question whose answer changed every race weekend. While the final standings are set in stone, all the major teams–Red Bull, Ferrari, and Williams–were constantly trading blows throughout the year. It’s likely they’ll have caught up to Mercedes for the new season, and there are already high expectations for McLaren, which means you should anticipate fierce competition in 2015. 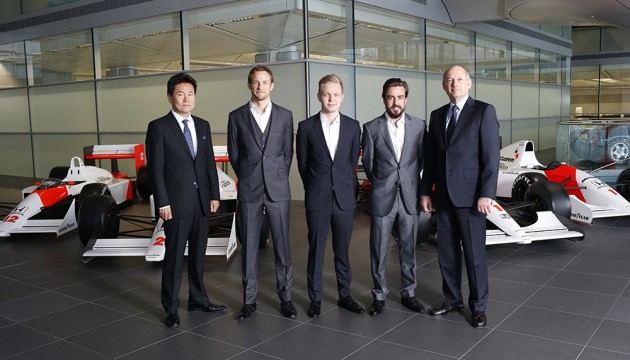 It’s not uncommon for a team to try to grab the best two drivers on the grid to increase its chances at a double championship win, yet the 2015 driver lineup is nonetheless full of surprises. I never thought Vettel would leave Red Bull, but he did, and though Alonso had once said his career would end at Ferrari, it won’t. Vettel is taking Alonso’s spot at the Prancing Horse while the latter goes back to McLaren, which is more surprising still, given the debacle that ensued last time he was there.

Even more impressive is that all the top teams seem to have gotten their hands on exceptional talent. Hamilton and Rosberg, whose skills need no further praise after last year, remain at Mercedes. Ferrari has Räikkönen and Vettel, two polarizing world champions—one because of his blunt manner and the other simply because he’s been winning too much; McLaren has Alonso and Button, two of the most experienced drivers on the grid and both champions as well; Williams has Bottas, whose performances hint at a possible championship in his future, and Massa, who came ever-so-close by a single point in 2008. And Red Bull has Ricciardo, the surprise prodigy who alone managed to steal wins from Mercedes last year, and Kvyat, a promising rookie from Red Bull’s proven Junior Team development program. There’s always going to be someone to root for.

4 – More tracks on the calendar

The worst part of your favorite sport is usually when it ends, but the 2015 Formula 1 season will be one of the longest and most action-packed thanks to a full, 20-race calendar. 2014 marked the return of the famed A1 Ring—now known at the Red Bull Ring—and the debut of the Russian Grand Prix in Sochi. In 2015, F1 will also return to Mexico City for the first time since 1992.

5 – Most overtakes in history

Pre-2010, Formula 1 was suffering from an incredibly low amount of overtakes per race. The cars’ overly complicated aerodynamics would cause loads of turbulence in their wake, which made it impossible to stick to someone in the corners and get close enough to pass on the straights. After new regulation changes, which introduced the Drag Reduction System (DRS) and simplified aerodynamics, the number of overtakes-per-GP skyrocketed—though there still were some who saw DRS as being a gimmicky and artificial “push-to-pass” button. Today, DRS is less powerful than it used to be and overtakes are at what I’d call a sweet spot. Races aren’t boring anymore—well, except for Monaco, but hey, it’s Monaco!

Are you hyped yet? I know I am. Only a little less than two months to go before the season starts again in Melbourne!