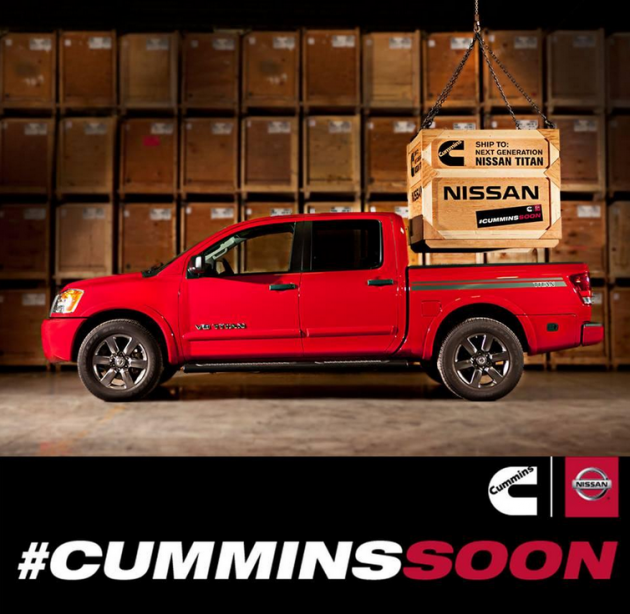 When it comes to Nissan making a 5.0-liter Cummins turbo diesel, the automaker’s instance on hemming and hawing with utter disregard for its audience falls somewhere between Mulder and Scully and Jim and Pam on the pantheon of “will they or won’t they.”

Based on this tweet from earlier today, we can effectively change the status of a Nissan Titan powered by 5.0-liter Cummins turbo diesel to will. For now…

Five liters of turbocharged diesel power. Are you ready for this? #CUMMINSSOON pic.twitter.com/xseq7KnIGe

This follows a similar tweet from a little more than two weeks ago, which means that we’ve nearly been at DEFCON WILL for a month.

Nissan has been looking for a way to crank up sales of the Titan pickup, and providing a turbodiesel option would certainly be a great way to set them apart from the Fords and Chevrolets of the world. Whether this means we’ll see one in the wild by the time the LA Auto Show rolls around remains to be seen, but all of this fancy talk about #cumminssoon indicates that we might be in for a surprise.

Speaking of #cumminssoon, we’ve really got to talk to Nissan’s Twitter team about that somewhat questionable hashtag. It’s almost like they forgot they were posting to the Internet there for a minute. There’s absolutely no way anyone could exploit that for comedy.