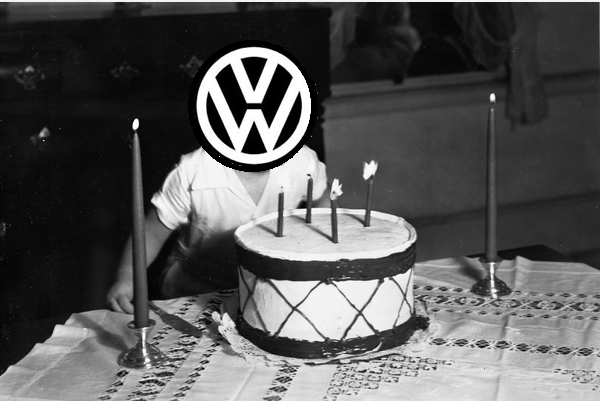 Although it’s not necessarily widely known, Volkswagen shares a birthday with CCR frontman John Fogerty (70 today), Toronto’s crack-smoking mayor Rob Ford (46), singer-songwriter Colbie Caillat, and British actress Carey Mulligan (both 30). VW, though, is older than all of them, as it’s enjoying its 78th year of existence this Thursday.

On May 28, 1937, the government of Germany (then under the control of Adolf Hitler) formed a state-owned automobile company called Gesellschaft zur Vorbereitung des Deutschen Volkswagens mbH. Later that year, they wisely shortened it to just “Volkswagenwerk,” or “The People’s Car Company.”

At the time, only about one in every fifty Germans owned an automobile, which was seen as a luxury item. The idea behind VW was to create an affordable vehicle that would meet the transportation needs of the average citizen. Porsche founder Ferdinand Porsche, under orders from the fuehrer, designed the KdF (Kraft-durch-Freude)-Wagen (“Strength-Through-Joy” car) to serve that purpose. 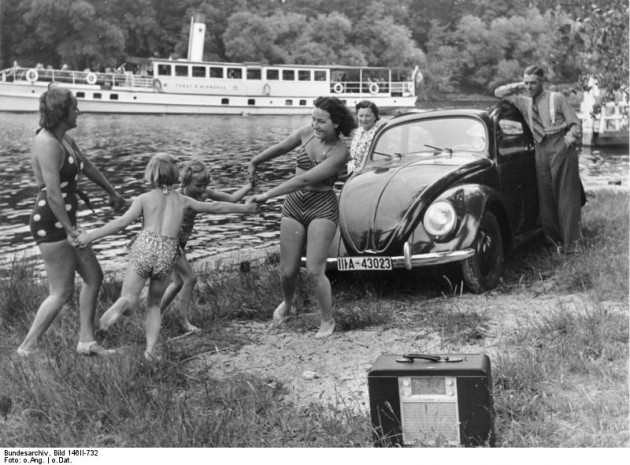 KdF Propaganda: “A family playing by a river with a KdF-Wagen and radio receiver”

But right after the KdF debuted at the 1939 Berlin Motor Show, the outbreak of World War II forced Volkswagen to halt production just two years after its founding. After the war ended, the Allies saw Volkswagen manufacturing as the ideal way to revitalize industry in West Germany.

Americans were initially uneasy about buying a car with Nazi roots, but that all changed in 1959, when the advertising agency of Doyle Dane Bernbach launched a landmark print campaign that used humor and an unconventional approach to sell the newly-dubbed “Beetle” to the American public.

(Fans of Mad Men will recall that Don Draper wasn’t sure which he hated more, the ad or the car.)

VW quickly became the top-selling auto import in the United States, and from 1960 (when the company went public) to 1972, the Beetle surpassed the worldwide production record of 15 million vehicles that had been set by the Ford Model T between 1908 and 1927.

Today, Volkswagen is the biggest automaker in both Germany and Europe, and has a global reputation for top-notch engineering and efficiency. Here’s to another 78 years, VW.